‘The heart has its reasons’: emotions and cognition in the world of finance

Let’s call him James, a trader in a City investment bank; young, smartly dressed, confident, and a little impatient. He sat across from me in the interview:

“It’s really important to stay cool. For myself, I can say that I really don’t have much emotion while I trade”.

Half an hour later, as he relaxed a little, the façade had started to crack:

“Actually the pressure can be horrendous, a trade goes badly wrong, you are staring into black hole, frozen, knowing you should get out but just hoping the market will turn . . I rushed off the desk and threw up in the toilet – I was terrified”. 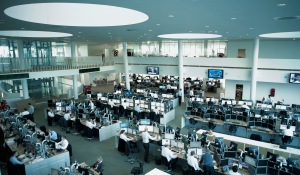 The interview was part of our research on risk taking. We interviewed traders and their managers in four City banks to understand more about their risk decisions and behaviour. To our surprise, many of them talked a good deal about their emotions. The less experienced traders like James clearly felt it was wrong to experience strong feelings and took a while to mention them. However, many of their more experienced colleagues were much more open about their emotions [1,2].

As the study went on, some key themes started to emerge. We heard a lot about how traders manage their emotions; but also how they used them in their decision-making. This was deeply worrying to one financial economist working with us. ‘I can’t believe they are really that irrational’ he told us.

So are emotions irrational, as he believed? Try a thought experiment. Imagine you are driving to work, you know the route well and are an accomplished driver; you are driving whilst holding a conversation with your passenger and listening to music on the radio. Suddenly a young child runs out in front of the car. What do you feel and how does this affect your behaviour? If this has ever happened to you, you will know that there is an immediate emotional reaction which causes you to focus all of your attention and resources on whatever it takes to avoid hitting the child. Because of the intensity of your focus, time seems to slow down. This is an example of an emotion driven behaviour. Emotions tell us what to pay attention to and they spur us to action.

Were these emotions irrational? Just like the ability to perform a numerical calculation, emotions can be a tool for rational decision-making and action. This is not a new idea. The title of this article refers to a quote from Blaise Pascal, a French mathematician and philosopher, writing in the 15th Century

“The heart has its reasons which reason knows not of… We know the truth not only by reason, but by the heart“.

More recently, neuroscience research has pointed to the importance of emotion in supporting effective everyday decision-making [3,4]. This seems to be the case in trading too. Many traders talked to us about ‘gut feel’ or intuition. It was clear that some of the highest performing traders saw feelings and hunches as valuable information about what to pay attention to; based on deep experience and unconscious pattern recognition.

“You have to trust your instincts and a lot of the decisions are split second so you need to know where the edge is and what you are going to do about it. Having a feeling is like having whiskers, like being a deer; just hearing something that the human ear can’t hear and all of a sudden you’re on edge. Something somewhere just gave you a slight shiver, but you’re not quite sure what, but it’s something to be careful about, something’s around. It is a certain type of intelligence, but more about intuition.”

This aligns with what we know from research. There is good evidence from experimental psychology that physiological responses show reactions to stacked odds and prime changes in behaviour, well before any conscious awareness of an emerging pattern, or any conscious intention to change behaviour [3]. Not all intuition is equal though. Whilst less expert, lower performing traders also talked about intuition they had less sense of where these intuitions came from and probably had less reliable hunches. Those traders at the top of their game more often talked about bringing together a feeling about the markets with other sources of information.

“So you know a combination of technical and emotional as well as what the analyst thinks, as well so you sort of bring the instruments you have available to you to make the decision rather than [snaps his finger] I fancy buying that.”

However, just like numerical calculation, we can make mistakes with emotion. Both calculations and emotions can mislead as well as inform.

In a more recent study, traders told us about some of the important ways in which emotions can lead them astray[5]. Common issues include:

The challenge then for traders seems to be to regulate their emotions effectively to avoid emotional mistakes without losing access to the experience and pattern-based information that their emotions give access to. In our interviews with traders we found a strong pattern of more effective emotion-regulation strategies among the high performing traders. Top traders were typically good at reframing gains and losses in the much wider context of a year, or of their career. Lower performing traders typically managed their emotions by trying to supress them or by avoiding situations which produced negative emotions.

In a follow up study, we used heart-rate monitors to get a physiological measure of emotional responding and emotion regulation during the trading day. We were able to conduct our study during a period of considerable market turbulence and used the VIX (colloquially referred to as the ‘fear factor’) as a measure of market volatility. We had two strong findings. First, all traders found it more difficult to regulate their emotions when markets were highly volatile. Second, consistent with our interview data, expert traders were much more effective at regulating their emotions [6].

More recent work with investors who trade their own portfolios reveals similar themes to the work with professional traders. Many talk about the difficulties they face in regulating their emotions. Often this is something they feel awkward discussing with others. One private investor told me

‘I thought that [getting emotional about trades] was my dirty little secret. It has been such a relief to find out just how common this is’.

It seems unlikely though that most private investors generate the levels of experience and market insight that enable top traders to benefit from expert intuition. Nonetheless, there are some important lessons for private investors from our trader studies. The evidence points to emotion regulation skills being possible to learn and to some of the techniques which support effective emotion regulation in a trading environment.

One of the key techniques used by traders is very simple; writing things down. Many traders keep to a discipline of writing down their trading strategy; then only changing the strategy if they first write down their reasons. Often by the time a trader has started to write down a reason for changing strategy, he or she will realise it is not a good reason; the market has not changed fundamentally and they were just getting led astray by strong emotions. Thus this discipline acts as a commitment mechanism and a brake on a tendency to act on emotion without interrogating what lies behind it.

Another observation we made concerned the importance of social support. Many traders told us stories of interventions by mentors or managers early in their careers which helped them develop the emotional resilience they needed. For private investors there is not the same kind of support. However many experienced investors trading their own portfolios told us of the importance to them of having a mentor or network they could turn to, to talk things through. Finally, just like in any stressful environment resilience is often improved by good sleep hygiene and a healthy lifestyle. Physical health and mental capability are closely entwined.

Let’s give the final word to a trader.

“One word…my biggest word would be discipline, and the second word would be honesty – with yourself …I have always worked on the basis that you don’t have to be the smartest person in the world if you’re honest. You only have to right, maybe 60/70% of the time and you can still make an awful lot of money. Whereas you could be very very smart, you could have a 90% success rate but if you’re not honest [with yourself], the 10% will kill you, and make it a real problem.”

Any thoughts about this blog? Please comment below Cancel reply

This site uses Akismet to reduce spam. Learn how your comment data is processed.